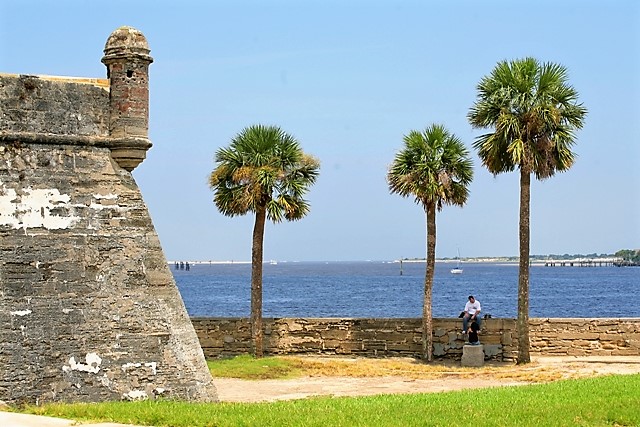 The area extends from north of the Castillo San Marcos to the City Gates to the North, west to the San Sebastian River and east to Intracoastal Waterway is known as "the North City."

This land was first settled by the Minorcans in the 1770’s as farmland and then the English gave 50 land grants with the goal of the settlement of St. Augustine being totally self sustaining. Most of the land on either side of the San Sebastian river was citrus groves. There are 2 homes which exist today which were built in 1880’s: 23 Water St and 19 Joiner St. and are excellent examples of the Territorial Period. Today there are a variety of architectural styles which include Victorian, Bungalows, etc. throughout the North City area. The most well known sites are the Mission of Nombre de Dios,The Fountain of Youth and the School for the Deaf and Blind.

The information displayed on this website comes in part from the IDX Program of the Florida Association of Realtors provided through the Florida Living Network. Real estate listings held by brokerage firms other than

Listing information provided in part by the IDX Program of My Florida Regional MLS DBA Stellar MLS. All listing information is deemed reliable but not guaranteed and should be independently verified through personal inspection by appropriate professionals. Listings displayed on this website may be subject to prior sale or removal from sale; availability of any listing should always be independently verified. Data last updated on

Listing information is provided for consumer personal, non-commercial use, solely to identify potential properties for potential purchase; all other use is strictly prohibited and may violate relevant federal and state law.

The data relating to real estate for sale on this web site comes in part from the Internet Data Exchange (IDX) program of the Northeast Florida Multiple Listing Service, Inc. Real estate listings held by brokerage firms other than